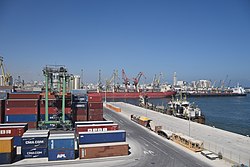 A license representing the “physical import or export.”

An “import commitment” (engagement d’importation), which is the authorization provided by the Foreign Exchange Office for transfer of foreign currencies from Morocco to foreign suppliers abroad.

The documents for goods transshipped through a third country port that may be requested include:A bill of lading showing Morocco as the final destination of the goods and the United States as the point of origin;Invoices issued by the U.S. company, addressed to the Moroccan importer; and A “certificate of non-manipulation”.

The Port of Casablanca is one of the largest artificial ports in Morocco and in the world, though it was eclipsed when Tangiers-Med—a cargo port 40 km east of Tangiers and the largest on the Mediterranean coast of Africa in terms of capacity.