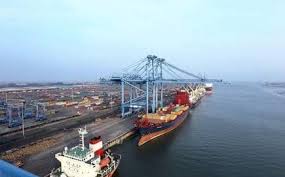 Popularly known as KPCL, Krishnapatnam is one of India's fastest growing seaport. Located at 190km north of the Chennai Port and 18km east of the city of Nellore, is operated by the Krishnapatnam Port Company Limited (KPCL) which is 92% owned by Hyderabad-based CVR Group. The London-based equity firm 3i Group Plc owns the remaining 8% equity in KPCL.

KPCL provides world-class facilities and infrastructure such as Cargo Handling, Marine Infrastructure, Storage Facilities and Krishnapatnam Port Trade and Transport Terminal (KPTTT). Apart from that the port is being developed in 3 phases. The 1st phase set up handled an annual cargo capacity of 25 million tonnes.The 2nd phase marked the enhancement of cargo handling capacity to 40 million tonnes leading to an increase in the total number of berths. An increase of 75 million tonnes of cargo per annum has been noticed in the cargo handling as of 2015.

The port town is situated in Muthukur Mandal of Nellore District, a coastal district (southernmost) of Andhra Pradesh, India. The history dates back to Vijayanagar Emperor, Sri Krishnadevaraya operated this port, due to which the port was named Krishnapatnam Port. Back in those days, it operated small boast sailing through Buckingham Canal, which was used as a waterway for transportation between Chennai and Krishna river delta. Iron ore used to be shipped in wooden boats and was declared a minor port in early 1980's by the Government of India.

The primary commodity handled by this port is Coal, its volume expanded from a less than 100,000 tonnes to 11.3 million tonnes in 2011-12. In addition to that it also plans to handle liquefied natural gas cargo, cars meant for exports, edible oils and fertilizers. Equipped with 5 Panamax gantry cranes, two berths of 650m and a channel depth of 13.5m, it allows to dock large vessels carrying up to 8,000 containers. As a fastest growing port, it has also added new services and facilities to its list as follows: Pipeline Infrastructure, Liquid Cargo Terminal, Ro-Ro Terminal.